We will start by explaining to you what a Letter of Intent is; this type of letter traces the agreement among two or more parties which comprehending that both the parties plan to give formal or legal status to. Heads of agreement, term sheet & memorandum of understanding are some identical ideas to a Letter of Intent.  To simply understand this, an LOI communicates the writer’s purpose of sending it to the reader.

The letter of intent becomes ‘LOI’ or’ LoI’ in an acronym. Whenever you’re referring to a particular document in legal jargon, the LOI is written in bold capital words.

Letter of Intent for University

A letter of intent (LOI) can also be referred to as the statement of purpose. It is made up of a short & concise essay. The purpose of this letter is to reassure your potential Head of the Department how keen you are to apply for a specific position.

It is mandatory in schools or colleges as part of the admission process. A letter of intent (LOI) expresses the student’s objective to register with a certain academic institution & sets out their credentials & future occupational specifics.

Letter of Intent for Scholarship

The LOI is often sought by universities from applicants seeking a scholarship. Letter of Intent from the candidate states the purpose & motivation of applying for a specific scholarship program. It is a proof of how your qualities & skills set you apart from all the other applicants for the scholarship. It is a formal structured letter that states the credentials, expertise & goals of the applying student. However, the format required may vary from university to university.

Letter of Intent for a Job

While applying for work, it could be mandatory for candidates to write a letter of intent for the job. Under these circumstances, a letter of intent for a job can be equivalent to a cover letter in which the applicant writes about their eligibility, skills, & experience for a vacant position. This letter could also cover all your queries for the company you would like to work for. It gives you a chance to introduce yourself & convince the recruiters to have a look at your resume as well.

Letter of Intent to Hire

The LOI to hire is a document that companies send to candidates they want to hire for their company. The letter of intent to hire primarily lets a prospective individual know that they are offering a job & think that the individual could be a potential employee. It will also include the responsibilities, the salary offered, & all the other conditions of the job.

The application for a graduate college in a specific subject requires a statement of intent. In this statement you are supposed to give reasons for why you’re applying for this program & what are you planning to do with this degree in the future. Furthermore, the statement of intent will simply be a collection of your ideologies & priorities. Your intention has to be straightforward & brief in the statement so that it proves your passion for your studies. It will also help the college become aware of how the applicant has a good sense of what they want to do.

Letter of Intent vs. an Offer Letter

Let’s start with the basic definitions of the two types of letters to help get an idea about the difference between the two.

A letter of intent is a type of letter that traces the agreement among two or more parties which comprehending that both the parties plan to give formal or legal status to. It is used by students or by individuals talking to companies for jobs.

On the other hand, an offer letter is a formal document from the organization informing an individual regarding a consensus between the employer & the future employee. It includes the key information about the job, for example, the position, the salary, the total number of hours/timings, the responsibilities, the company policies & ethics to be followed, & the fringe benefits.

The Distinction between a Letter of Intent & a Contract

The simplest definition of a contract is that it comprises an arrangement involving two or more parties, which makes them legally bound to do something or not. The following aspects are part of an agreement – offer & acceptance, mutual responsibility, consideration, competency & legality must be included.

A letter of intent is a paper which details the preliminary conditions of a relationship.

The key distinction in two of them is that a letter of intent is not unbreakable or not binding while a contract is considered unbreakable & has weight in the eyes of the law.

Memorandum of Understanding vs. Letter of Intent

A Memorandum of Understanding is an agreement signed by the parties involved together. It is optional & voluntary. It is not legally binding but shows the parties’ ability to continue with a deal.

Because it determines the nature & objective of the discussions, the MOU is seen as the beginning of negotiations. These are most commonly used in agreements on bilateral agreements but can also be used in important business transactions, such as when two businesses are merging.

A letter of intent is distinct from an MOU in a way that it is not binding on the participants & in a court, it, cannot be questioned.

Inquiry letters are only written to inquire or request the information you need. If you need to ask a university or an organization regarding some information like the dates of an application or about a vacancy then an inquiry letter is what you write.

Whereas, in several transactions, businesses need to negotiate & sign a letter of intent in many deals to ensure that they decide on the basic contractual terms of a contract prior to investing time & money. It starts as a proposal that will then be discussed & revised to represent the agreement between both the parties in the final document.

In terms of a university, a letter of intent expresses the student’s objective to register with a certain academic institution & sets out their credentials & future occupational specifics.

Is an LOI legally binding?

Based on the way it was written or if a judge found it legally bound, a letter of intent can be legally binding in most cases.

The judiciary ascertains if a letter is legally binding by taking into account the format the letter has been written in & what steps the parties stated in it subsequent to the letter signing.

For instance, the Court will more likely deny its legitimacy as a legal contract because both sides provide a record of non-binding letters of intent.

Cover Letters Format, Samples and Template - Everything about Writing a Winning Cover Letter 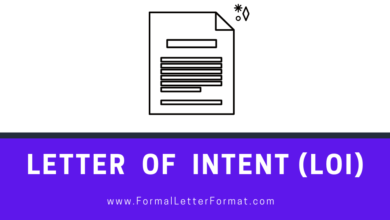